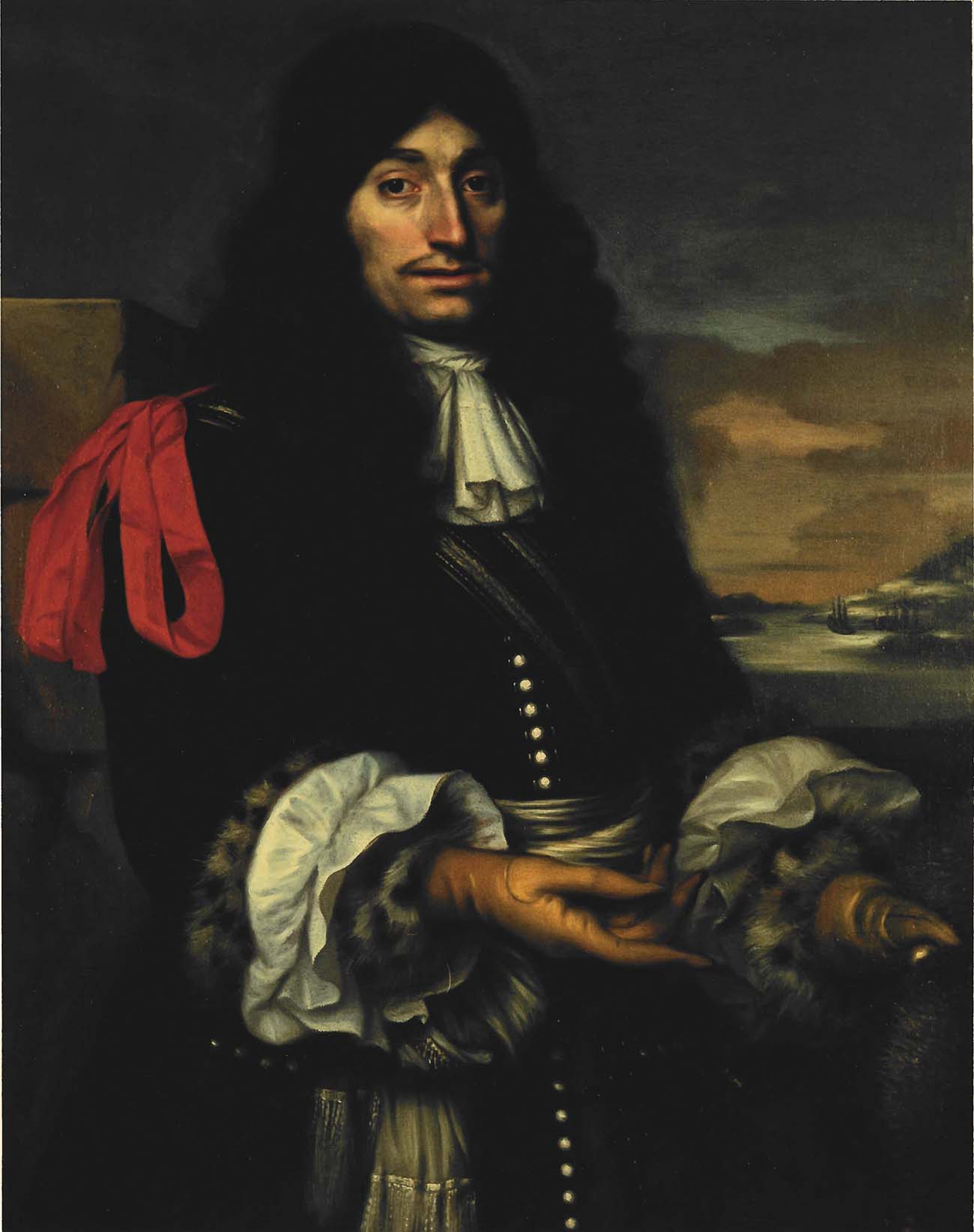 HENRI DE TONTI (~1649-1704) known as the “Fur Trader of the Mississippi” or “The Iron Hand”. His tacked name and date in butt stock appear impeccable “HENRI DE TONTI 1678” on right side of butt stock of his high quality European miquelet flint carbine. The 1943 silver presentation plaque on butt “Dr Joe Mayer / of the Iron Hand / from / Harry Schoff / 1943” between 2 famous arms collectors and scholars. Dr. Joseph R. Mayer (1898-1961) was prominent Rochester, NY physician, but his obituary spends most of its text describing his arms and armor collection and his research on Colonial Indian used flintlocks. Harry L. Schoff (1905-1965) operated a museum in Honeoye Falls, NY and like Mayer researched and wrote on the fur trade, and Indian arms in Colonial America. Henri De Tonti born in Italy of prominent lineage but forced to leave Italy as his father was involved in political intrigue as a child. At a young age he started life as a soldier, first a cadet in the French Navy, then the Army and in battle fought in 1674 a grenade blew off his right hand. He survived and had iron prosthetic made which served him well. He became known as “Thunder Arm” or “The Iron Hand”. Tonti had a most intriguing history in America. The date on this miquelet is the date he left France and arrived in Canada and first started his explorations in Illinois. Tonti’s exploits are well recorded in translated diaries and journals, traveling with fellow French explorer LaSalle, establishing trading posts throughout the Mississippi River Valley up to the time of his death near Mobile Alabama, 100 years prior to Lewis and Clark’s expedition among many of his routes.

“Tonti was one of the first explorers to navigate and sail the upper great lakes of North America. Tonti also sailed both the Illinois river which led to the establishment of Fort St. Louis, as well as the Mississippi river to its mouth and claimed it for France. Tonti later established the first permanent European settlement in the lower Mississippi valley, known as Poste aux Arkansas or Arkansas post, making him the “father of Arkansas”. in 1687, Tonti was engaged in wars with the English and their Iroquois allies. during this time, he was also able to conduct treaties with Native American tribes. in 1690, after he was granted La Salle’s fur trading commission, Tonti then commenced on a journey down the Mississippi to contact Pierre Le Moyne d’Iberville, who had established the Louisiana colony. Working under Pierre Moyne, Sieur d’Iberville’s brother Jean Baptiste Le Moyne de Bienville, Tonti was able to bring peace between the Choctaw and Chickasaw nations of Louisiana and proceeded to receive aid from the two nations. The use of his appliance that replaced his hand led these tribes to believe he had special powers. Henri de Tonti died in September 1704 from yellow fever. It is believed that Tonti’s “remains were laid to everlasting rest in an unknown grave near Mobile River, and not far from the monument erected in 1902 to commemorate the site of old Mobile.”